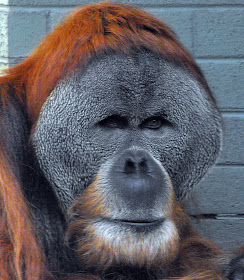 An orangutan (not the one of the story). Photo by Glintle.
Radiolab (1/25/10) reports how an orangutan at a zoo in Nebraska repeatedly used a curved piece of metal to pry open a service door and escape, to spend his time climbing in tall trees outside his exhibit.  The piece of metal was curved so he could hide it like a denture in his mouth.  He escaped only when he couldn't be observed by the keepers.

Not only does figuring out how the door worked show a high degree of intelligence--but the deception also shows his ability to understand the minds of his keepers.

Dogs are also capable of deception and counting.

"When I was a teen I rode my bike to the St Louis zoo. There the animals were in deep pits and you observed them from above behind a low concrete wall. The Orangutan had picked a sympathetic human and was crouching down looking pitiful and reaching up toward this man who finally reached down toward him. In an instant the ape had leaped up surprisingly high, grabbed the man's arm, climbed him and was over the wall and making his escape. He had totally played the guy. The zookeeper said he had used this trick repeatedly and they were redesigning the cage. Smart creatures that totally understand human nature."